In another thread a few weeks ago I mentioned stumbling across rebar stakes north of the Mesquite Sand Dunes and our very own Gowergulch42 commented on them and I regretted not photographing them at that time.

So out of curiosity during my last visit to the park first week October 2015 I trekked out about a mile past the tallest dune to the site of my photo shoot and I'll be damned if I could not locate the rebar stakes where I thought I remembered them. Baffled I decided to return to the parking lot by circling around the west end of the dunes.

Well, a few hundred yards on the return I nearly tripped over some old telegraph/telephone wire (I don't now how to tell the difference between the two types of wire.) You'll see what I mean in the video.

And then I saw a rebar laying on top of the same with a heavily eroded tip. Then I found another barely standing up. A light tug and it fell over revealing a crusty dark hote in the soil. I dug around it just a bit with the same rebar to see what it was about but just a few old dark chunks of stuff were under the surface.

Continuing another hundred yards or so I hit the jackpot of rebar stakes. About four or five of them in a line and another two or three 90 degrees to that line. I tried to discover if the rebars were marking out a large square but failed to locate any hint of the the other three corners (if they even exist). It the rebar square(s) exist they would be at least the size of football field squared.

My unlearned assumption is that the rebar were set out to study vegetation, wildlife, sand movements, etc in the 1960's 70's or may even 80's or 90's. If so I don't know why the studiers did not return and remove the stakes.

Another possibility comes from a park ranger, Ryan, I think was his name who told me that the original road way from Daylight Pass to Town Pass and Panamint Valley crossed on the north side of the dunes. He said you can still find some remains, ie old telephone poles out there.

The only evidence I uncovered was the wire you see ini the video. It was late and so I was lucky just to get a few shots of the rebar before darkness set in, let alone try to explore and locate the old resort/village north of the dunes. That will be another trip however.

As usual I totally enjoyed the peace, quiet and isolation out beyond the dunes as the sun set. I hope you all enjoy the few images and short video I captured to show you about the rebar.

BTW, I've been out to the dunes multiple times and at all hours of the day and night (with search lights) winter, spring, fall and summer, hoping to catch a sidewinder, lizards, kangaroo rats but have failed. The only real wild life I've seen and photographed is a coyote and a cute little kit fox right outside its burrow only a few hundred yards from the parking lot. 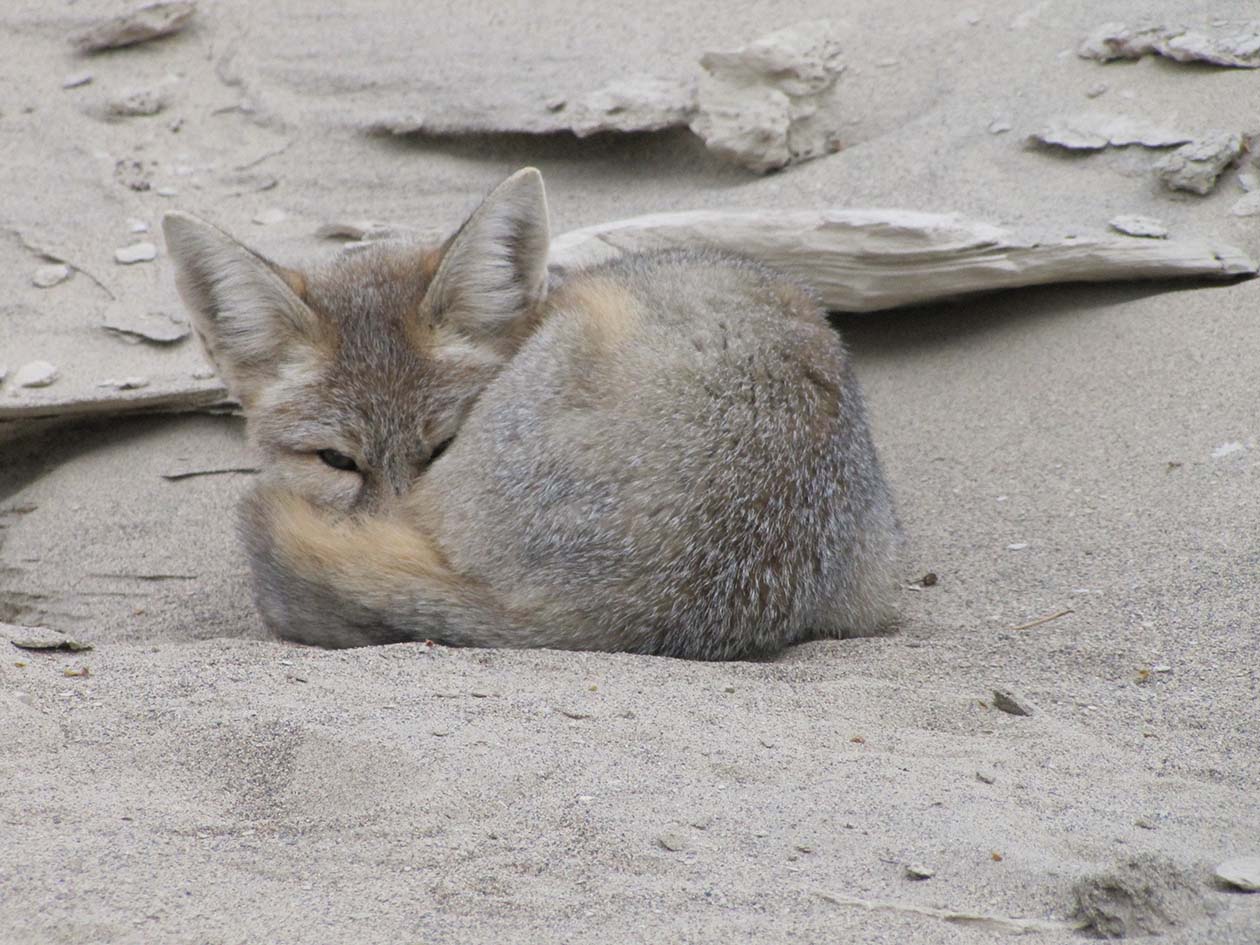 Isn't this kit fox one of the cutest creatures you've ever seen. Thank god they are protected in the park. The fox seemed used to people and the image was capture from about 15 to 20 yards out with a bit of zoom. I didn't want to disturb the little winking fox. Seeing this kit fox was one of the reasons I fell head over heels in love with Death Valley.

Thanks again Gowergulch42 for tweaking my curiosity about the rebar stakes. I am hopeful that your full time studies at university will not keep you from stopping by this forum once in a while. I have reviewed all of your blog entries about Death Valley and am super impressed. Thanks for documenting all of your explorations. Your narratives we well written as well.
Life begins in Death Valley
Top

Did that wire have any insulation on it? Or was it just simply uncovered metal wire? In the video it looks like the latter but I'm not sure.
Top

The wire appears to be without insulation unless it was

so corroded by the weather and blowing sand. This wire was in much worse condition than the wire I crossed on the way back to my car after visiting the square mine shaft at Death Valley Buttes two weeks ago.
Life begins in Death Valley
Top

OK, thanks. Unfortunately I'm not an authority on telephone/telegraph wires! Maybe at one time stiff, un-insulated wire was used for those applications?

BTW, regarding the little foxes, they are a treat! Some years ago I hiked Dry Mountain from the east (parked along the road between the springs and Steele Pass). I finished late and and for the last 1.5 mile or so across the desert to my vehicle, I was walking in the dark with a headlamp. That whole way, a fox followed me at a discreet distance. And then hung around near my vehicle/camp site for some time. Not sure if it was simply curious, or hoping for a handout!
Top

The old road and telegraph line between Skidoo and Rhyolite/Bullfrog went via original Stovepipe Well. Remanents of poles (they were generall simply 4"x4" posts) can be found along the right of way.
D.A. Wright
~When You Live in Nevada, "just down the road" is anywhere in the line of sight within the curvature of the earth.
Top

I've definitely found the wire (it is uninsulated) behind the dunes. And I've found it in multiple places up west of SPW village, where it runs more or less parallel to and south of 190. I've crossed it while entering Stretched Pebble Canyon and what Kauri calls Cairn Canyon. There's a few pole remnants (one nice, one marginal) along the entrance to Black Point Canyon, very near 190.

Here and there are bits of old glass insulators. It appears it was two wires, both are solid strands.
My Death Valley panoramas:
http://www.media.mit.edu/~geek/dv_panos.html
Top

MojaveGeek wrote:It appears it was two wires, both are solid strands.

One each way. Could carry two calls at a time (if I'm correct)
Check out my reports and informative ramblings at http://dvexplore.blogspot.com
Top

Just got back from about a week in DV. I visited the area of the Dunes but failed to locate the rebar!

I did find quite a bit of the old phone line wire, a couple of phone line post stumps, other artifacts, and sections of the old road that curves around the dunes. I came across footprints that may have been yours from your trip around the dunes documented in your recent video. But no rebar, lol.

Maybe I'll watch your video a couple of times before my next trip and see if that helps me!
DV Road Conditions: https://www.facebook.com/DeathValleyRoadConditions
Top

By "old road" do you mean something other than the now closed road to the former dunes picnic area? There should be more back there but I haven't round signs of road in the sat images or on foot, though I have come across the phone wire back behind the dunes. I really like the area at the north side of the dunes; scenic views and silence.
My Death Valley panoramas:
http://www.media.mit.edu/~geek/dv_panos.html
Top

MojaveGeek wrote:By "old road" do you mean something other than the now closed road to the former dunes picnic area? There should be more back there but I haven't round signs of road in the sat images or on foot, though I have come across the phone wire back behind the dunes. I really like the area at the north side of the dunes; scenic views and silence.

Yes, the road I'm referring to had one end near the parking area for the little Ranger station in SW.

From what I've pieced together, it appears it ran NE from there to Stovepipe Well (the actual well). I saw a tiny bit of it on Google Earth and went to that. In my wanderings through the area (over three different hikes), I've found a few segments of it. Sometimes it's fairly clear and even seems to have a built-up roadbed. In other places it is simply wheel tracks.

Here are a few pics. As you can see, when looking back that way, it appears this road lines up well with Hwy 190 and presumably the old road that preceded the highway.

Thanks, those are nice pix of the old road!

I may have stumbled upon it where it's just the two tracks and not realized they were historic.

I would think that the phone line would have run near it, and it would have lined up pretty nicely with, as you say, the old Stovepipe Well (and behind it, the canyon which also had an old road and down which the phone line runs) and modern 190, which presumably takes approximately the old toll road route. Interesting.
My Death Valley panoramas:
http://www.media.mit.edu/~geek/dv_panos.html
Top

Thanks for the excellent photos and updates Candace_66

and MojaveGeek. If I had read your additions to this thread prior to my excursion into the area on Dec 3rd Thursday I would have expanded my search area.

I thought I was done exploring the area after that hike but now I'm going to have return and spend a whole day out there because I'd like to find the road you photographed and follow it more east and west.

I appear to be creating a double thread on this topic with my last post "Mesquite Dunes Mysteries" so sorry about that.

I hope to return this spring to the park.
Life begins in Death Valley
Top

MojaveGeek wrote:Thanks, those are nice pix of the old road!

I may have stumbled upon it where it's just the two tracks and not realized they were historic.

I would think that the phone line would have run near it, and it would have lined up pretty nicely with, as you say, the old Stovepipe Well (and behind it, the canyon which also had an old road and down which the phone line runs) and modern 190, which presumably takes approximately the old toll road route. Interesting.

Yeah, I kinda thought the same, that the phone line would be near the road. But from what I've seen so far, that isn't the case. At any rate, I haven't found any road fragments adjacent to the wire sections I found.

I actually found a couple of road fragments that don't line up with the others, as if there was another road closer to the dunes. Maybe a spur of some sort? I need to do more looking in the areas pointed to by what I've already found.

As for those tire tracks, I can't guarantee that they're "historic", but they do line up with other segments I found.
DV Road Conditions: https://www.facebook.com/DeathValleyRoadConditions
Top

Update: The rebar, it would appear, has been "cleaned up."

I located the spot based on the background in some screencaps I made from DVDazed's video. I think you'll agree I was in the right place, though I was standing a wee bit closer when I took my pics. But there was no rebar to be seen.

On a more serious note, while I was out there I revisited some of the waypoints I'd stored for sections of the 100+ year-old Rhyolite-Skidoo phone line. Only to find that some of that was missing as well. In more than one place, you could see where the wire had been pulled out of the dried mud (example photo below). And there was one piece of wire that had been folded up...then left there.

Note that there were no footprints in any of these areas; there must have been a heckuva wind storm since anyone was last out here.
DV Road Conditions: https://www.facebook.com/DeathValleyRoadConditions
Top