Does anyone know whose graves these are?

Does anyone know whose graves these are? 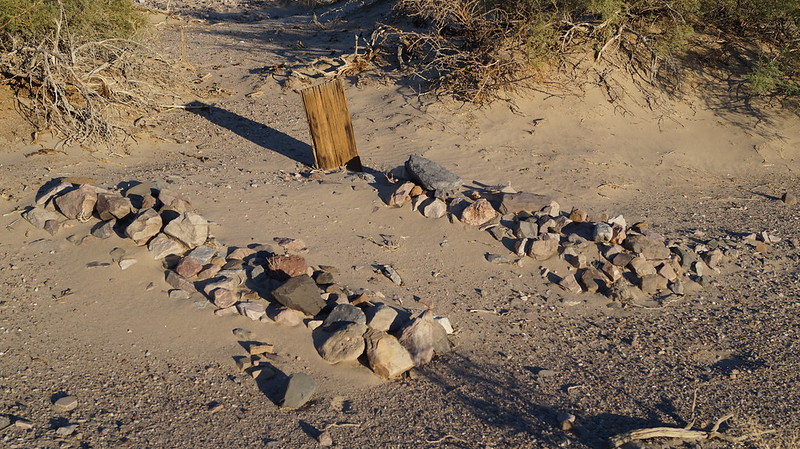 Don't have an exact answer given there is no background to help ascertain. But ...

The grave looks to be of a style similar to the Harris/Dayton graves, in that there are two similar strips of stone with a marker. Make me wonder if two sets of remains are under there, especially since the marker is at the head of the right hand strip. Some of those whose bodies were found in the valley were buried and stone put over the top of the grave, such as the case of Val Nolan, who is buried just east of the Original Stovepipe Well.

The salt brush in the photo makes me think the grave to be on the valley floor. Back during the boom days of the first decade of the 20th century, the coyote ravaged corpses two men, one whose name was Thomas Blodge, the other name I forget, was found on the valley floor. Might be their graves.
D.A. Wright
~When You Live in Nevada, "just down the road" is anywhere in the line of sight within the curvature of the earth.
Top

There are just off 190, almost directly across from Cow Creek about 1/8th of a mile from the road. I'll find the exact location this evening.
Top

I'd be interested too. I've wandered about that area quite a bit and never run across this. 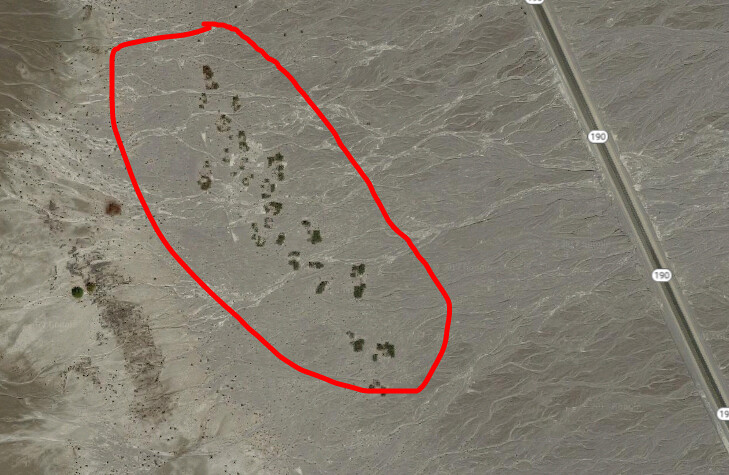 this is the general area, keep in mind that Cow Creek is nearly across from this point.
Top

Interesting, I'll be there in a couple of weeks and will take a look.
Thanks
Top

I was going to share this info long ago but life got in the way. Since then I see by your subsequent posts that my info as no bearing on the grave near Cow Creek. But I'll share this anyway.

Emory Bodge and Thomas Flause left Rhyolite bound for Skidoo on August 18, 1909. Times in Rhyolite were dull, Flause lost his job at the Imperial Grill, which had just closed down. Bodge planned to continue on to Los Angeles, where he had family. Both were former residents at Skidoo and had experience crossing Death Valley on foot.

By September 9, people in Skidoo, who had knowledge of the pair’s intents and departure date from Rhyolite, reported them missing. Reports of three persons that were found dead in the valley also hit the regional newspapers, adding to their worries. A search party of eight left Skidoo the following day and found the bodies of both men, separated a short distance apart. It was apparent that the men had run out of water and died of thirst.

I've seen another photo, also claiming to be of Bodge, but the remains are difficult to make out amidst the remaining clothing. There are eight people in the other published photo, seven in this one. However the wagon and all but the additional person are the same in both photos. It may be this is be the body of Thomas Flause, or possibly the same skeleton stripped of the clothing to make it more visible for the photo.

The point the bodies were found was claimed to be near Skidoo, however to me it appears this photo and the other was taken somewhere on the valley floor or western alluvial slopes. At any rate, nowhere near where the grave the subject of your question, as it was known that Flause and Bodge did stop at Stovepipe Well. However I share this info for they are among the many victims of Death Valley during the summers of the first decade of the 20th century during the various mining rushes in the Death Valley region.

D.A. Wright
~When You Live in Nevada, "just down the road" is anywhere in the line of sight within the curvature of the earth.
Top
Post Reply
7 posts • Page 1 of 1