Not much going on since DV is closed, so I took a trip down memory lane, to my first visit to the park. Since I had no idea back then what I was getting into, I submit this for your entertainment, hoping to give you a chuckle over my tutorial experience. I knew next to nothing about the park, as will be obvious in what follows.

My adventurous younger sister wanted me to go backpacking with her in Joshua Tree during February 2016. I agreed to try it, but as the time neared, we decided that the projected temperature there wouldn’t work (20s overnight). Someone at her office suggested Death Valley and I agreed, especially since at that time I had two kids living in Ridgecrest nearby. I ordered Digonnet’s book and a map on Amazon and had them shipped to my sister in Oregon so she could make some plans. Meanwhile, I typed “Death Valley hiking” into Google and up came panamintcity.com. Was I ever hooked – I would spend evenings looking through Steve’s trip reports and getting very interested.

The time arrived – I picked up my sister at the Vegas airport, and we spent the first night at the Furnace Creek campground. We drove around the loops three times before asking someone for help finding the tent spots. Our plan the next day was to backpack to the entrance of Palmer Canyon, explore it, and sleep there overnight. We parked at the Titus exit, hiked over to Fall Canyon’s wash, but did not find the path going out of the wash. We figured it must be somewhere north, so we started going that way. Up and down ridge after ridge, getting steeper and steeper until we had to acknowledge that we were getting nowhere. 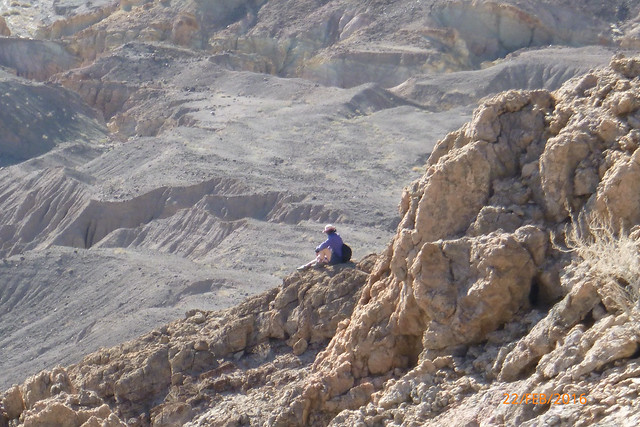 My sister contemplates how lost I have gotten us. Now I know we should have been much farther west.

I’m not sure what to call our situation: we weren’t where we wanted to be and didn’t know how to get there; weren’t sure where we were; but not quite lost, as we knew which way to go to get back to the van. As the sun set, we found an almost-level piece of ground and pulled out our gear for the night. Everything we needed was in our backpacks, except for… the tent poles. Oh well. We cleared most of the rocks, laid out the tarp and the tent, and just slept on top of them. 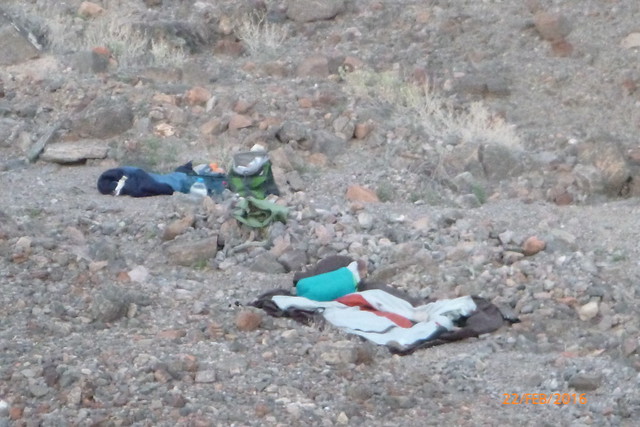 Our accommodations for my first-ever night of backpacking

It was a beautiful night, moon and lots of stars. I woke up once feeling more rocks than I remembered. Sitting up, I found out I was halfway off the tent, very slowly sliding down the hill. 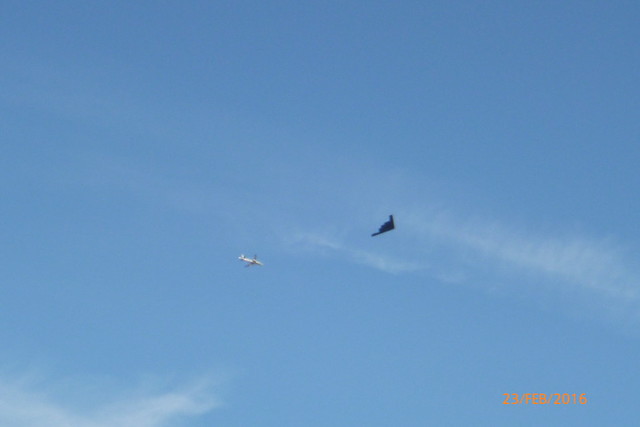 We had a hot oatmeal breakfast and a fly-over by the Air Force’s B2 the next morning. Up and down, back over the ridges to the Fall Canyon wash, and then we hiked Fall Canyon as a consolation prize. 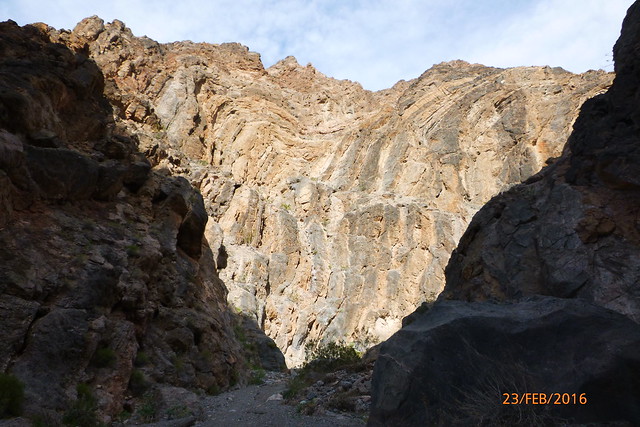 I must have been very impressed with this wall; I took six pictures of it. 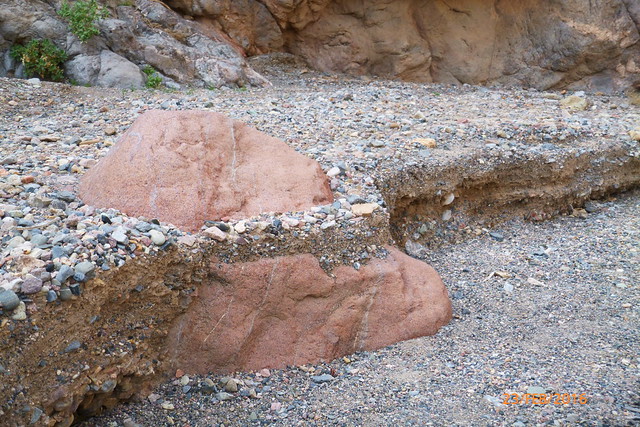 I wonder if the gravel around this rock has finished washing away yet. 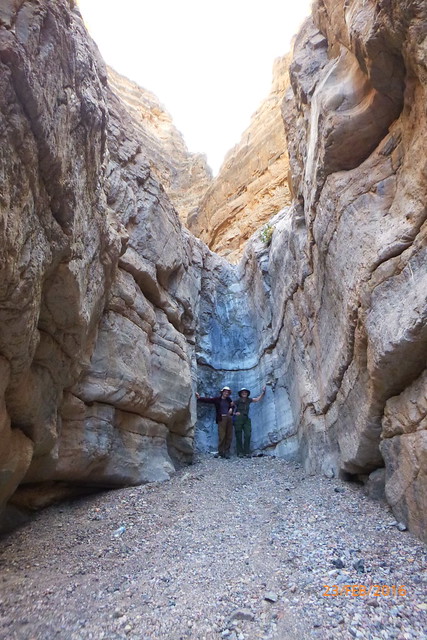 And we made it, finally.

Even better, driving west we got showers and took a dip in the pool at Stovepipe. We had just enough time before sunset to get a glimpse of Mosaic Canyon, turning around at the first wide area. 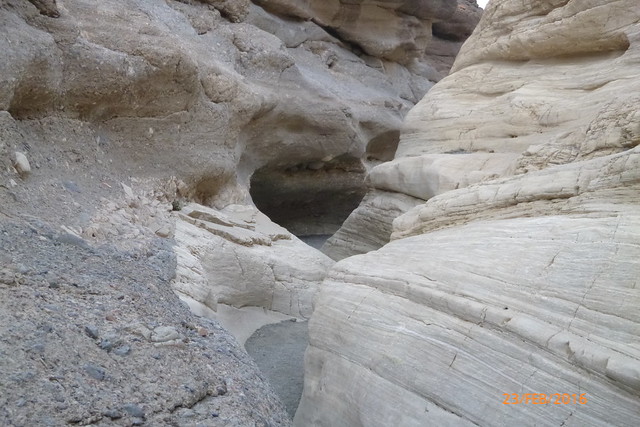 My sister has an eye for things - she noticed if you look back after the first small dryfall in Mosaic, you can catch this heart shape.

After that it was a somewhat scary first-time over Towne Pass in the dark trip up to Panamint Springs for a night of civilized lodging. At dinner that evening, someone told us about Darwin Falls, so we went there in the morning. It was beautiful and I enjoyed showing pictures of it back in Nebraska, asking friends if they thought I had gone to Death Valley or Hawaii. 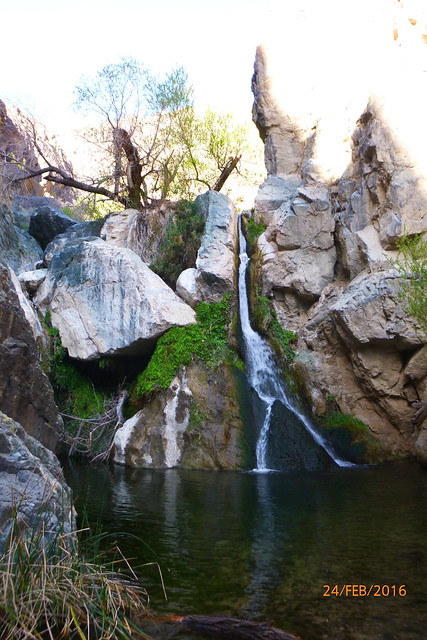 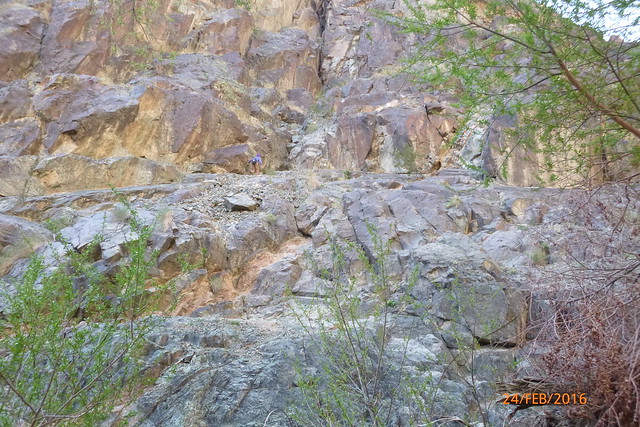 Back over Towne Pass, much more scenic and enjoyable during the day, and then what? Upper Monarch Canyon sounded interesting, but the “road” we took off Daylight Pass was probably not the right one. Again we hiked up and down ridges until evening, and then set up camp, with tent poles this time. Another beautiful starry night and in spite of not finding my goal again, I was enjoying just being where I was. 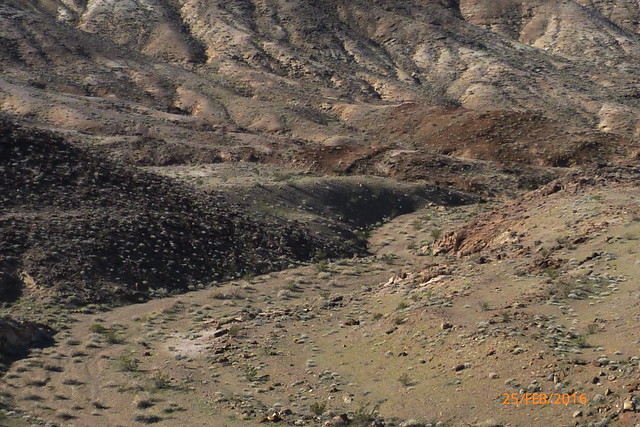 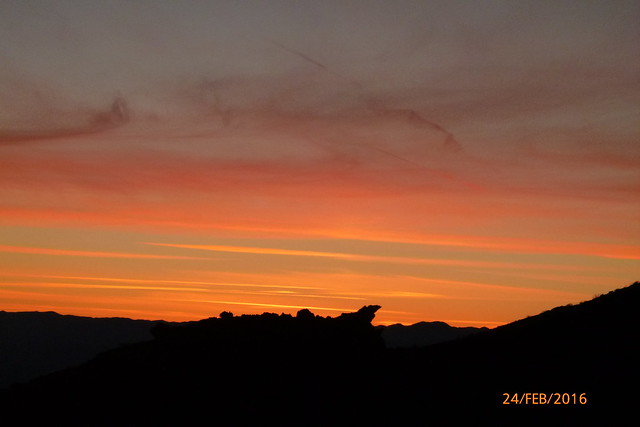 The next morning, we decided to be tourists and visited Badwater, Natural Bridge, and Desolation Canyon. 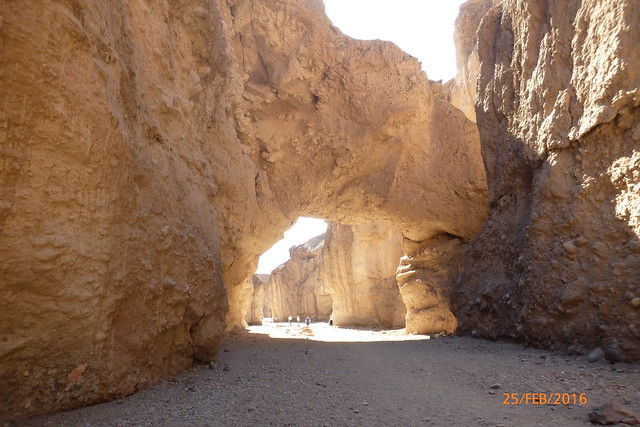 You've all seen this. 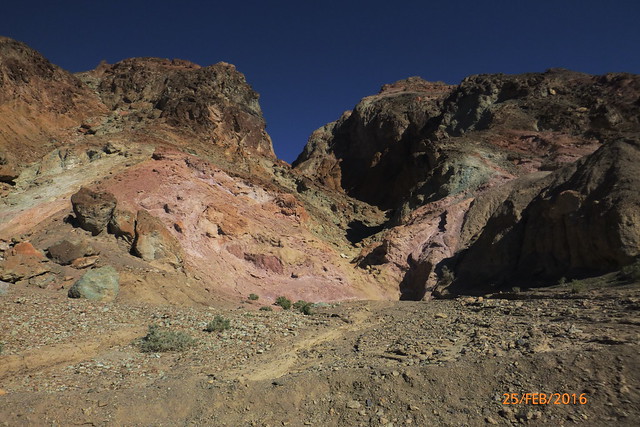 Pinks and greens near Artist's Palette 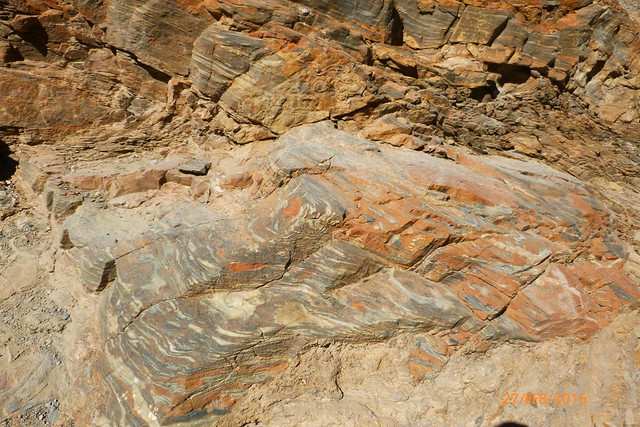 Swirly rock at the top of Mosaic's first major dryfall

On top of all our other good fortune, we were very lucky to be in Death Valley for an amazing Super Bloom. It made a deep impression, and so I was shocked when I returned later that year to find...no flowers? 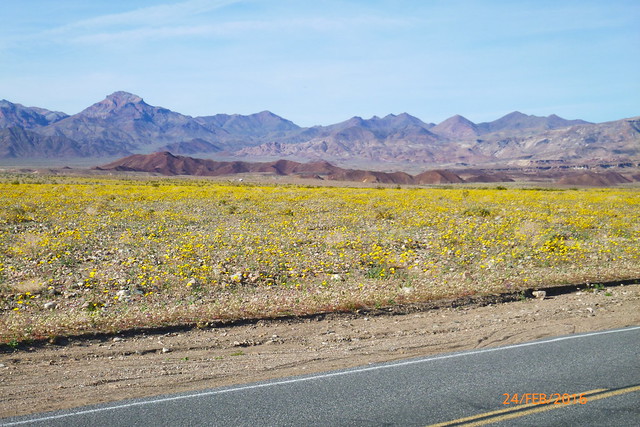 A field of Desert Gold 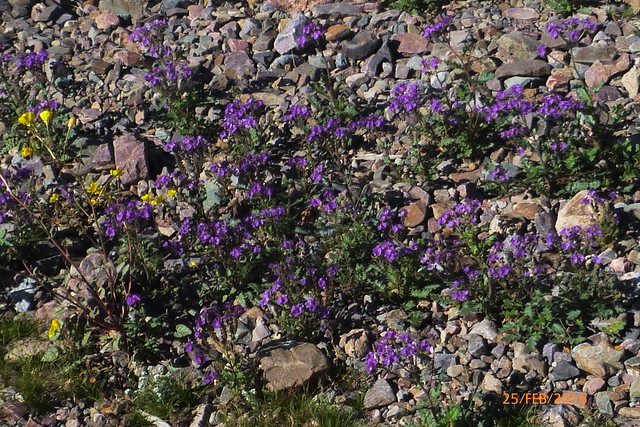 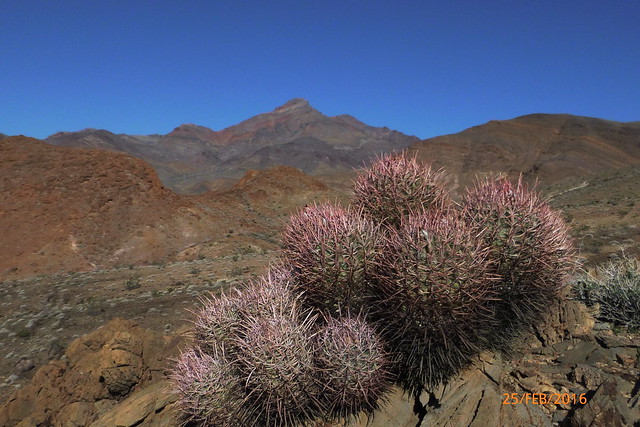 A family of cactus posing in front of Corkscrew Peak

After that, we were off to Ridgecrest to see family, Baskin Robbins, and Xin Bowl. Our final Death Valley adventure was on the way back to Vegas; this time we did a proper hike of Mosaic up to the second dry fall, before dropping my sister off at the airport and starting my own drive back to Nebraska. And the whole way back, I was thinking of what to do the next time I could return…
Top

Re: First visit to Death Valley

Very nice trip report, thank you for sharing! I especially appreciate seeing DV photos since I was planning a trip to DV this spring that had to be cancelled...

I'm thinking the road you took towards Monarch Canyon that wasn't the correct road could have been a service road; I recall there's one in that area. Certainly a nice spot!

Sometimes one finds very nice places by making a wrong turn en route to a highly visited destination. Looks like you discovered that on your first trip, so keep exploring!!
Death Valley named locations map, and my trip reports: http://kaurijacobphotography.yolasite.com
Top
Post Reply
2 posts • Page 1 of 1