With these dimensions and appropriate tires, what roads in the park would it not be able to handle?
Top

Think of your Avalanche as a Suburban. Both share the same platform. I’d think it capable of all park roads except class 5 stuff, like Echo Canyon above Inyo Mine on the west and Lee ghost town on the east. And the like.
D.A. Wright
~When You Live in Nevada, "just down the road" is anywhere in the line of sight within the curvature of the earth.
Top

Thanks, D.A. I was concerned about length and overall size for Lippincott, Steele Pass, etc. Where would Mengel Pass rate on that scale?
Top

I was thinking Lippencott might be tight in the hairpins, but doubt it would require mulitiple point turns. My main concern would be at a point midway down where the road is narrow due to the edge of the road sloughing off. There has been repairs (chainlink fencing embedded in the cliff face), but I have no clue as to the current state as it has been nearly a decade since I last travelled the route.

It has been two decades since I’ve travelled the Goler/Mengel/Butte Valley/Warm Springs route. I’ve often done it during the early and mid-90s when there was a lot of bedrock falls, but the last time I did Goler it was a comparative freeway; and, from what I’ve seen online, is still so. The immediate Mengel route isn’t length sensative, but clearance sensative, as well as overhang sensative. Your planned lift should address those concerns.

Steel Pass has no technical issues, except one tight curve just less than a mile south of the summit. DeDeckera Canyon narrows have one width related spot, but mostly at axle and rocker pannel level; and the gap is bevelled outward. A truck as wide as yours generally ride the sides higher.

The Pleasant/South Park loop could be dicey due to dense brush in the wet sections, Chicken Rock and the bridge, but I understand the latter has been modified. In my experience, driving that section was scary enough in small vehicles (Wrangler, Tacoma), especially downhill; I would never do it in a full size rig.

I’d think a 4” to 6” lift might be overkill, unless you are also thinking huge tires. Your rear differential is your lowest point (front diff on GM trucks are designed for independent CV shafts, thus smaller and tend to be boxy instead of spherical), so lifting it to the moon but keeping smaller tires really give little advantage. Large tires require lower ratio gearing, otherwise you give up low range crawling (modern trucks aren’t geared as low as they were in the days of yore), plus suck a lot of horsepower and fuel to turn the mass. Introducing large tires without compensating by gearing is akin to putting overdrive on all gears.
D.A. Wright
~When You Live in Nevada, "just down the road" is anywhere in the line of sight within the curvature of the earth.
Top

Where can it not go? Can go - unbelievable!

You're lucky to have DA Wright responds as he's a wealth of DV wisdom.

I'm not recommending but this dude's Chevy Suburban cleared the treacherous step at the top of Echo Canyon recently. Poor video quality as was late in the day and he was in a hurry but catch the action at minute 13:45 over the steps and at 14:05 over the dry fall. I asked him to post up photo of the suburban but he has not yet.

Re: Where can it not go? Can go - unbelievable!

Thank you, but I don’t consider myself particularly knowledgable. Just have been there, done that, just like the majority of others here.

Actually, I cut my four wheeling teeth (for rough trails) on a stock Chevy S10 4x4 pickup with standard suspension. It was low. But it taught me line picking skills in the rough. When I got my Tacoma with the TRD package, it was light years ahead of the Chevy in terms of off road capability. But I got that Chevy in a lot of places because of learning my lines.

By the way, cool video! I’ve not done the full traverse over the Funerals, just part way up each side independently. Up Echo to the Inyo Mine, then over to the Schwab townsite. On another trip hiked up to the Echo townsite after coming up from Lee ghost town to the mouth of the canyon and parking.
D.A. Wright
~When You Live in Nevada, "just down the road" is anywhere in the line of sight within the curvature of the earth.
Top

Thanks for the great info and the video, guys! This is all in the pre-pre-planning stages, and I have to be more cautious than most because if I do this, it means driving most of the way across the country and doing it solo. I could bring my wife, but even Hunter Mountain freaks her out. (Actually, 190 descending toward Panamint Springs from the west freaks her out.)
Top

Just back from another trip ... my buddy followed me down Lippencott in his stock 2000 Tundra with zero 4x4 experience. I told him to hit me up on the CB if he needed a spot or had any concerns. Of course I forgot to turn on my CB ... anywho, too tired right now to look up specs of Avalanche versus Tundra, but assuming they're in the same ballpark and he had absolutely no issues doing Lippencott. Compared to when I first attempted it over a decade ago it's actually kind of boring now. Probably could have done it in RWD and just picked decent lines.
Top

For what it’s worth:

Basically, the Tundra is narrower, but length difference is negligible. The Avalanche has an edge in turning radius. So, TacoLand’s comparison is a good one to go by.
D.A. Wright
~When You Live in Nevada, "just down the road" is anywhere in the line of sight within the curvature of the earth.
Top

Thanks for doing my homework, D.A.! Also wanted to weigh in that, unless you're going monster truck tires (and ... why?) then a 2-3" lift is usually the best compromise. My '01 4Runner saw a huge hit in gas mileage when I lifted 3", put on larger tires, and a roof rack. I'll be adding more armor (see: weight) at some point here and while it's all fine and good, definitely slows things down and increases the cost of my daily driver.

Just thinking that if you're now talking about driving cross country might be kind of a drag with a huge lift on it. What are you hoping to accomplish with the Avalanche, and why specifically that truck? Just curious. They're kind of an odd duck with that pickup bed and with 15mpg in the city (stock) you're going to be looking at maybe ~13mpg after a lift.
Top

Why that truck? Because it is what I happen to have

Thanks for the tip on hit to the gas mileage, which is already bad enough. I will probably just keep it stock. It will not be ultimately worth it to put all that work into a 12 year old truck. I still might take it across the country, but will live with the limitations of its stock 8.6" clearance.
Top

In my opinion, unless one wants/needs a dedicated rock crawler, leave things alone and go with what you got. Saves dollars and your butt in daily driving, and your rig generally will be capable of going where you have the skill to take it. Your Avalanche should be capable of tackling a large majority of legal routes within the park. And where it can’t, well hiking is enjoyable also.
D.A. Wright
~When You Live in Nevada, "just down the road" is anywhere in the line of sight within the curvature of the earth.
Top

I finally snagged two screenshots from CrazyDei's YouTube channel where he posts many of the drives in DV.
The two are of his rig that cleared the top of Echo unassisted. Looks like he scored a dent in the passenger side rear at some point. 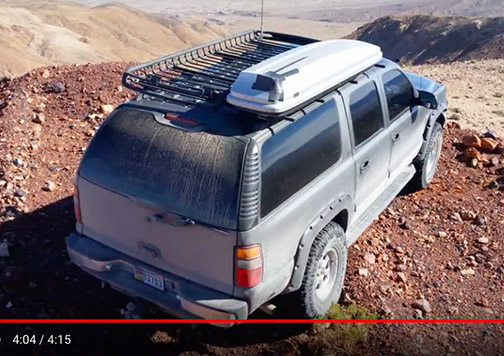 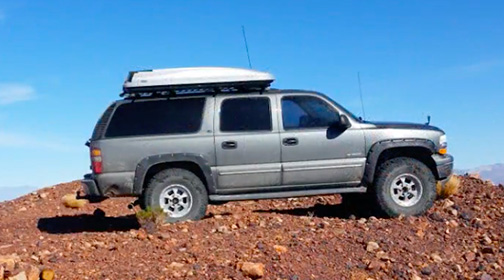 wbdeford wrote: ↑
Tue Mar 13, 2018 4:31 pm
Thanks for the great info and the video, guys! This is all in the pre-pre-planning stages, and I have to be more cautious than most because if I do this, it means driving most of the way across the country and doing it solo. I could bring my wife, but even Hunter Mountain freaks her out. (Actually, 190 descending toward Panamint Springs from the west freaks her out.)

I wouldn't recommend doing any challenging off road stuff solo. Some places are a long hike out if you get stuck. Might be worth trying to find other people who are interested and get a couple vehicles to go
Top
Post Reply
14 posts • Page 1 of 1