A place to discuss Death Valley: Reconnecting A Community
http://www.death-valley.net/forum/

by kayaker77
Hi everyone,

I love to solo hike and backpack in Death Valley in spring, as most of my friends are not hikers and I do love the solitude. Been doing it for the past 10 years. But my biggest fear is running into a mountain lion(s). I hiked this past February in Quail Canyon and saw a few bones near the semi dry stream beds and some cows in the general area, and some ticks but thankfully no big cats. Has anyone ever seen any in the park? If so, where and how did you react?

Thanks for any info!

by D.A. Wright
DVNP webpage. Scroll dow to near bottom.

Lions like deer. Deer like the higher mountains with pinyon forests, though I’ve seen them in Eureka Valley and on the open Joshua forests north of Hunter Mountain. If you are hiking in elevations 5,000 feet and up, keep an eye open. However, cats tend to keep their distance and they see you long before you see them. They also tend to stay up high so they can scan their territory and dining choices. Keep an eye on rocky ridges and sometimes trees if the forest is open with widely scattered trees.

As to what to do/not do if you encounter one:

by Kauri
Fortunately, I have never seen a mountain lion in DV, but I have seen evidence of them on many occasions.

There are two areas in particular I have seen a lot of evidence of mountain lions, and hence would advise hikers to be especially careful there.

The area between Navel Springs and Mummy Canyon. One of the drainages in this area has a huge pile of bones and horse-size scat (I refer to this drainage as "Mountain Lion Den Canyon" on my webpage).

The area between Moonlight Canyon and Red Wall Canyon. When hiking in this area, we have encountered many scattered bones, mountain lion scat, and two mutilated bighorn carcasses. In 2013, NPS staff found a fresh kill in Moonlight Canyon.

Also, as of 2015, there was a mountain lion in the Sugarloaf Peak area (see Steve Hall's report).

by kayaker77
Thank you, that is some great info! I appreciate that, especially since I'm allergic to cats, LOL. But seriously, that is good to know. Thank you.

by Candace_66
From the link:

Does "surrounding mountains" mean the mountains around DV itself? Or does it refer more to the higher ranges around the Park?

I've heard/read many times that they're around the Park. But, has a photo of a mountain lion ever been caught on any of the numerous wildlife cameras?

(For that matter, does DVNP ever publicize wildlife camera shots? Other agencies/units do.)

Desert National Wildlife Refuge recently shared on FB a great photo of a mountain lion at a guzzler on the refuge. This is at Perkin Spring (I've visited it before) in the Sheep Mountains: 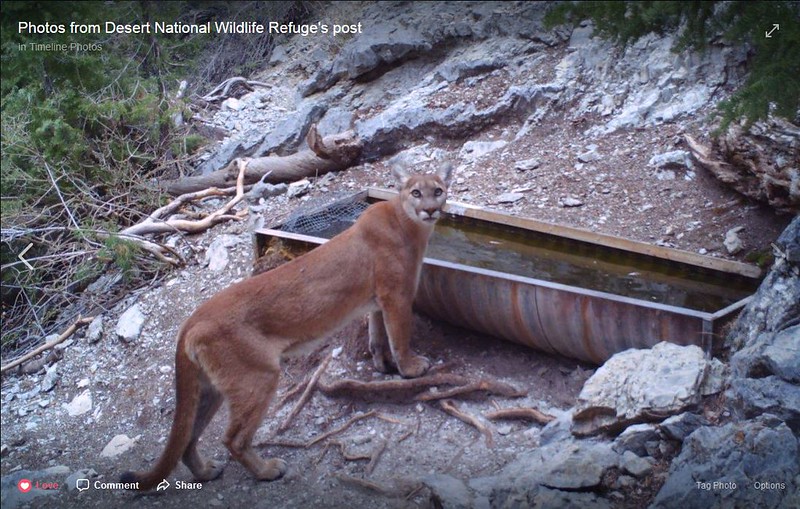 by N0 02
That is an interesting shot of the big cat. It must sense that something is there something watching its movements.

Thanks for sharing the photo.

by kayaker77
Wow - that is a really big cat!! Yeah, it does look like it's aware of being photographed/watched. Thank you for posting this, very interesting. Still really hoping never to be ambushed by one of these.

by shane
I’ve seen them elsewhere in CA but have only seen tracks in DV. Personally, I’d love to encounter one in the desert but it seems extremely unlikely given how skittish the truly wild ones are. Hell, I haven’t even managed to see live Bighorns yet! Just bones, pellets and tracks.

by kayaker77
I saw a ton of bighorn sheep in Zion National Park last year. The biggest thing I've seen in Death Valley so far is coyotes, and they were really skittish.

Shane, where else in California have you seen mountain lions?

by shane
Kayak, I've only seen them in oak woodland environments, in both Shasta & Solano counties.

This is from one of those wildlife cameras with a motion sensor. It does make a sound when it goes off. So that's why you'll often see the animal looking at the camera.

by Sparky of SoCal

kayaker77 wrote: ↑
Tue Apr 17, 2018 8:02 pm
I saw a ton of bighorn sheep in Zion National Park last year. The biggest thing I've seen in Death Valley so far is coyotes, and they were really skittish.

Shane, where else in California have you seen mountain lions?

I have seen them Piru Creek, Deep Creek, Rubicon Trail

by CanyonmanClark
They're around for sure.

In 2016 two members of the park staff had inadvertently scared a mountain lion out of the brush in Six Springs Canyon. It seemed lethargic as it ran out of the brush they were walking on and then it ran up to the ridge before disappearing.

Also back in 2012? Park staff found the remains of a radio collared lion somewhere in the Grapevines if I remember correctly.

by kayaker77
Wow, that's interesting. Okay, that does make sense if there's a motion sensor there.

Sparky, what did you do when you saw the mountain lions, how did you and them react?

by Sparky of SoCal
Rubicon it ran across the trail and it was spooked from a deer carcass nearby at night. The other two sightings were while fishing. Both the cat and I were scared nearly to death I think. You get to see a lot of great things fishing in those out of the way areas. First off water, the hunter and the hunted need water. Creeks and rivers make noise so hearing thinks is tricky for the animals. Waterways are typically in the west are in canyons that have wind blowing up and down during the day. I can prove that by the number of flies I have deposited in trees along such waterways. The wind will pull the smells and some sound downwind quickly and not linger around for the animals to pick up. That goes for both the hunted and the hunter. When I see bears or cats I make as much noise as I can. Besides the teeth chatter from fright yelling and moving tree branches has worked so far. I have yet to really justify carrying a gun fishing, so I carry wasp spray instead of “BEAR SPRAY”. The bear spray I have looked at was more of a fogger and I don’t want to wait for the things to get within that range to be affected. The wasp spray is more like silly string I can aim and control, aiming for the face. I also thought a fog type spray may include me in the cloud. The one time I did not see a cat was hiking back up out of Forks of The Kern area was seeing cat tracks over my tracks going down the day before. I will continue to think they are just as afraid of me as I am of them. When that plan fails it most likely won’t matter and they can talk about it over my grave.
All times are UTC-07:00
Page 1 of 2
Powered by phpBB® Forum Software © phpBB Limited
https://www.phpbb.com/