Share your interests, have a laugh or discuss anything not related to Death Valley
Post Reply
16 posts

So, I'm a little ways into the return leg of an eleven mile hike and I notice that my Garmin Foretrex 401 display is malfunctioning. The current time and time of sunset fields are normal, but my elevation reads "------" and my distance says 100. The last I checked I was at about 5200' and about 6.8 miles. When I get home the data won't load on my computer, but the unit seems to otherwise be functioning normally. Now here's the interesting part of the story. I "might" have been a little ways into military property since there are no signs in the area showing the boundary. Could the military have done something to mess up the data? Otherwise, could a general satellite malfunction cause the problem?

I've seen the elevation field go blank before, but that was during an announced GPS outage due to military testing in the area. That was back in June of 2016. That time the data loaded onto my computer without a problem and the mileage was not disrupted at all.

Also I've seen a few other weird blips occur with previous GPS units I've had. In particular on a hike up Surprise Canyon I had straight lines going off in weird directions when I viewed the route on my computer after the hike.

BTW, during the hike today I saw a few horses, including these guys: 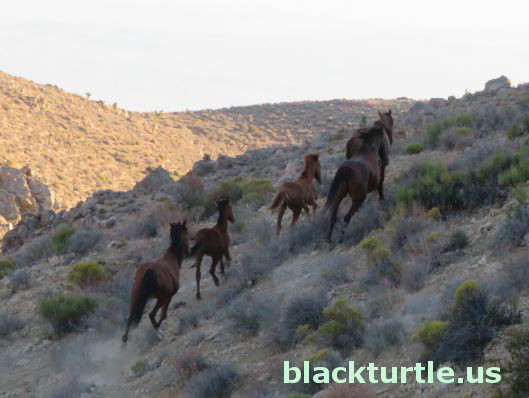 It may have been the military in the area again just they did not advertise this time. Could also be other things.
Top

Etcheron Valley is where most GPS jamming is done in the area. It is usually announced as far as I know. If it is going on it could of course upset GPS location and elevation.

If there wasn’t jamming going on the most likely cause is the device itself.

Nice photo of the horses!
Top

If your GPS is working OK now, then it was something in the field. If your GPS is still on the blink, then there is a problem in the unit. Unusual readings can happen in valleys and canyons where there is a limited view of the sky. There is also a possibility of the satellite signal being reflected off a rock wall introducing error.
Top

Cleared the memory on the GPS and tested it out this evening. Works fine. So, it must have been something to do with a signal received during the hike, which really makes me curious about what happened. Unusual readings I've encountered before, but I've never had the data corrupted to the point where it won't upload to the computer. Would jamming simply cause weird readings or could it actually corrupt the data stored on the unit? Also is jamming something that can be done over a very limited area (say a square quarter mile) or would it necessarily cover a larger area? I've heard that the military in the past used the same model I use (Garmin Foretrex 401) and so they might know how to "hack" these units with their jamming. Lots of speculative questions here. Anyone know anything?

Another horse from the hike: 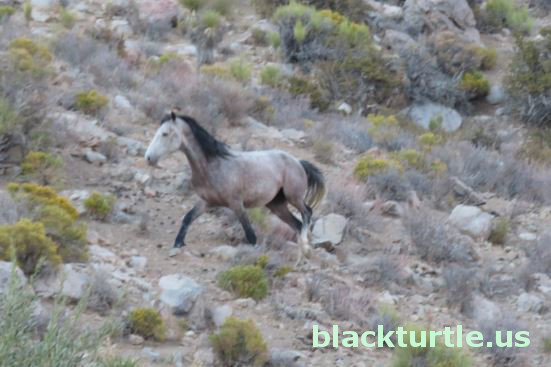 Do a Google search for "GPS jammer". A bunch of listings will come up. Do the same search on Ebay. You can buy a jammer for ten bucks. They are highly illegal, but when has that ever stopped anybody?
Top

I'm clueless on GPS tech but not clueless about your huge contribution to this forum over the years. Your website is massively impressive and I love your musical adaptations that go along so well with your content. I wish I lived closer to the park like you do so I could try to follow your tracks about.
Life begins in Death Valley
Top

Late to this discussion. I think it would take some powerful juju to corrupt the data in the unit once it had been logged. Causing a local or wider area disruption of the GPS signals such that position is erroneous, erratic, or just won't get a fix is what I would expect from GPS jamming. The anntennas are not picking up executable code from the sats, just data signals, which they then compute on. This would, IMHO, make it hard to hack the unit itself just by means of some form of GPS spoofing. I could be wrong of course.
My Death Valley panoramas:
http://www.media.mit.edu/~geek/dv_panos.html
Top

And yes, nice pix of the horses!
My Death Valley panoramas:
http://www.media.mit.edu/~geek/dv_panos.html
Top

MojaveGeek wrote: ↑
Sun Oct 07, 2018 5:54 am
Late to this discussion. I think it would take some powerful juju to corrupt the data in the unit once it had been logged. Causing a local or wider area disruption of the GPS signals such that position is erroneous, erratic, or just won't get a fix is what I would expect from GPS jamming. The anntennas are not picking up executable code from the sats, just data signals, which they then compute on. This would, IMHO, make it hard to hack the unit itself just by means of some form of GPS spoofing. I could be wrong of course.

Yes, I don't see how executable code could be received from satellites. My thought was that possibly the file was corrupted due to some kind of memory overflow. Not sure how that would work, but there must be a limit to the amount of info that can be stored in a GPS unit. If somehow too much info is received, possibly memory could become so full that the saved info gets corrupted. Is there anything that would stop memory from over-writing itself and thereby producing a corrupted file?

Another possibility might be that the data format can be changed via some switch that can be flipped via GPS signal. I would imagine that it would be possible for the manufacturer to include secret codes receivable via GPS which can change settings on the GPS unit.
Top

Yeah that makes since, it may not be but it could be.
Top

This thought came to me early on, but I stayed quiet until I heard more. Are your computer ports or USB ports that you plug your GPS into fuctioning normally? If the software controlling data exchange is malfunctioning, it might have caused an issue.

My 12 year old Toshiba laptop is experiencing something similar, giving me periodic messages that an external hard drive is malfunctioning, disconnecting it. The drive is working fine on other computers. In a few days my Toshiba stops this behaviour, accepting the drive. It works normally for weeks/months, then starts up this bad behaviour all over again.
D.A. Wright
~When You Live in Nevada, "just down the road" is anywhere in the line of sight within the curvature of the earth.
Top

Thanks for the topic. It's help us.
Top

I would imagine the GPS unit should be able to deal with full memory just fine. After all, that's a condition you could encounter in normal use, if you just kept using it and never cleared out the stored track data.
My Death Valley panoramas:
http://www.media.mit.edu/~geek/dv_panos.html
Top

So, at this point I'm of the opinion that the anomaly was caused by some kind of experimentation going on at the base. The odd thing is that this was late on a Sunday afternoon and I would have thought that experimentation would be done mostly during the work week. My GPS unit worked fine last week and the route uploaded without issue. It will be interesting to see if I encounter more problems while hiking in the Argus Range especially when in close proximity to the base boundary... which as I mentioned is for the most part unmarked.
Top
Post Reply
16 posts