At 8:19 pm, a 7.1 magnitude (preliminary) earthquake struck the same fault system that the 6.4 did yesterday, and its thousands of aftershocks. USGS Earthquakes (earthquake.usgs.gov is still offline as of this post, but this is the largest earthquake to occur in California since the 1992 Landers quake (a 7.3). Something that needs to be understood about earthquake magnitudes is that the number scale, called the Moment Magnitude scale (Richter has not been used for decades now), is on a 2/3 logarithm scale, meaning that the difference between whole numbers reflects a 30x difference in the amount of energy released in an earthquake. The difference between a M6 and M7 is a 30x increase in the amount of energy released by a fault slip. The moment tensor is calculated by a few different and very complicated ways that are beyond my ability to communicate effectively.

A 6.4 is a large quake, but not catastrophic in California due to its history of large quakes and rigorous building codes. 7.1 is at the point where it can heavily damage infrastructure and most buildings. This is a large quake that will be talked about for ages. The USGS is already on site, surveying the fault motion that occurred in the quake yesterday, on the 4th, so I guess it's a good day to have a major earthquake.
Check out my reports and informative ramblings at http://dvexplore.blogspot.com
Top

I felt it over here in the Inland Empire!

I am sitting in my Claremont, CA hotel room. I had literally just hung up after talking to a friend on the phone, when I felt the building start swaying or more like shaking.

I was sitting at the desk and at first was going to get under the desk. Then decided to instead go stand in the room doorway (leads to the interior hallway). Seems like it went on for close to 30 seconds?

BTW, sheltering under sturdy furniture or standing in a doorway is what I was taught to do (I was born & raised in SoCal).

I bet the USGS site is swamped!! Lots of people felt this one. I've been having trouble with their earthquake map. I finally got it up, but the updates aren't always coming through correctly.
DV Road Conditions: https://www.facebook.com/DeathValleyRoadConditions
Top

Doorway isn't a great solution since they can move in an earthquake and are no less susceptible to collapse than the rest of the wall. Against an interior wall and a big table are your better bet.
Check out my reports and informative ramblings at http://dvexplore.blogspot.com
Top

OK, maybe I'll just stick with the desk if we get another big one while I"m in here! It really is pretty solid.

The USGS shows a 5.5 aftershock at 8:47. I felt that too, as a mild shake (almost like a vibration) through the floor...
DV Road Conditions: https://www.facebook.com/DeathValleyRoadConditions
Top

Fortunately, I'm only feeling the biggest ones. I'd hate to be out there in that area, as they are getting aftershocks constantly, every minute or two according to the USGS site. That has to be seriously hard on the nerves.
DV Road Conditions: https://www.facebook.com/DeathValleyRoadConditions
Top

A seismologist with the Southern California Seismic Network tweeted that she and others are considering the 6.4 yesterday as a foreshock (with its own sequence of aftershocks and two foreshocks) to the major 7.1 this evening. I'm concerned about the safety of residents. Northridge and Loma Prieta were both smaller than this one.
Check out my reports and informative ramblings at http://dvexplore.blogspot.com
Top

Here's a resource I"ve been looking at: The CHP Traffic Incident Information Page:

Choose "Bishop" from the Communications Centers dropdown. Then for each row in the listing, click Details to get more information. Watch the time stamps, as events may be listed in either ascending or descending order.

Among other incidents, apparently there was a rockslide (now cleared) on the 190 between PSR and Father Crowley Point. And another on the 127 at the Old Spanish Trail Hwy. There hasn't been any rain so I presume these are quake-related.

And also some more damage on the 178.
DV Road Conditions: https://www.facebook.com/DeathValleyRoadConditions
Top

Woke up early this morning to news of a new quake, 7.1 magnitude (I am visiting Boise, so it’s an hour earlier). I expect this one is going to hurt.
D.A. Wright
~When You Live in Nevada, "just down the road" is anywhere in the line of sight within the curvature of the earth.
Top

I had just started a running workout seconds before the quake hit here in Trona. I can tell you that the sensation of running during a strong quake is unlike anything I've ever experienced. The power went out, but miraculously it's back on as of about fifteen minutes ago. There have been dozens of aftershocks since the 7.1 quake.... all night long!

ARGUS PEAK: A fire started at about the 5000 foot level. (The peak is about 6500 feet.) How the fire started is a mystery. The only reasonable theory would be that two rocks hit and made a spark.

Oh... and BTW... here's a pic of my chimney! Thank you very much 7.1 quake!!! Hopefully the earthquake insurance I signed up for will come through for me! 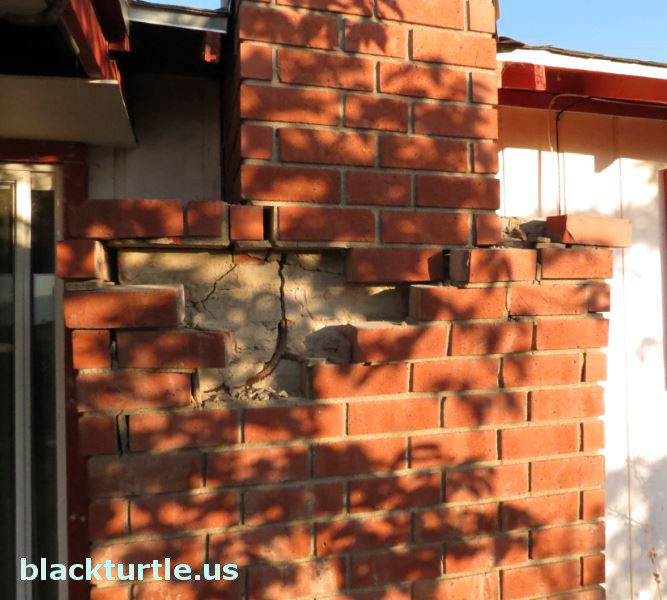 Sorry to see the chimney damage, but glad you are alright, blackturtle. Hoping for the best in the surrounding communities.

One interesting report I saw on the Mt. Whitney Facebook page was that some hikers on the mountain didn't feel anything during the July 4 quake. I always thought that being really high up would be a dangerous spot.
Top

I was sleeping in the Ashram above Tuttle Creek (very close to Lone Pine) when the Landers quake hit in June of 1992. A whole bunch of people were there and most people woke up as a result of the quake. So, it seems hard to believe that this newest quake was not felt by hikers on Mt. Whitney.
Top

In the Landers quake, my wife, parents and I were camping at Quaking Aspen campground west of the Kern River north of Kernville. Felt the quake pretty good there. Couldn’t pick up any radio in the car until the radio station in Lake Isabella came on air at 0600, the quake being the focus.

My wife and I were still living in Trona, but my parents lived north of Joshua Tree on the road to Landers, so they made a beeline for home. They had significant damage to their home.

Any word on the situation at SV Minerals?
D.A. Wright
~When You Live in Nevada, "just down the road" is anywhere in the line of sight within the curvature of the earth.
Top

This video has some visuals of a damaged smokestack at the plant:

What I've heard is that the lights at the plant are back on, but no sound of machinery. The biggest concern for residents is water. Water lines were snapped in several places between here and Ridgecrest.
Top

Is the fire still burning? Thanks for all of your reports.
Life begins in Death Valley
Top
Post Reply
23 posts