Cyty's, Sidewinder and the Crack

Cyty's, Sidewinder and the Crack

This trip report is from January of 2019; it’s taken me awhile to figure out how to post it, and find enough quiet time to do so. My hiking and climbing abilities are limited due to my age, so no exciting adventures here (my apologies), but maybe an appealing picture or comment. By the way, I really enjoy everyone’s trip reports, and read them eagerly even if I don’t anticipate ever accomplishing them myself.
I visited Death Valley near the end of January; my son from Ridgecrest was kind enough to join me for a couple days of exploring. First, we took the lower trail from the Keane Wonder Mine parking lot across to Cyty’s Mill. (How is that name pronounced, phonetically?) The spring was flowing very well. We followed a wash downhill west from there, heading to the natural bridge. My son paused to empty his boots, and while I was waiting, I saw an old metal bucket tucked away under a tilted boulder. 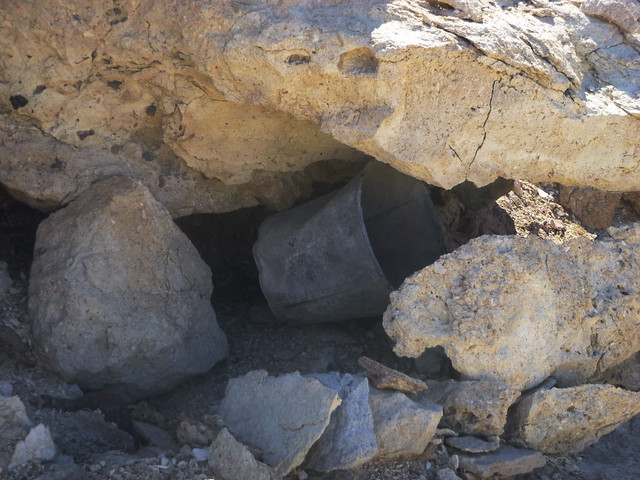 As we continued down, we saw more scraps.
We found the natural bridge using some helpful pictures (thanks, Steve Hall!). 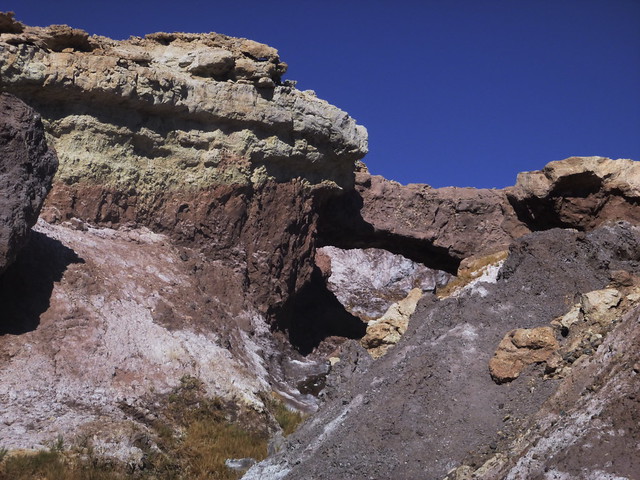 My son climbed up out of its small canyon, and discovered a shorter way back over nice flat terrain. We also found an unusual cairn, very well-constructed and large, much different than the usual thrown-together hiker’s landmark. 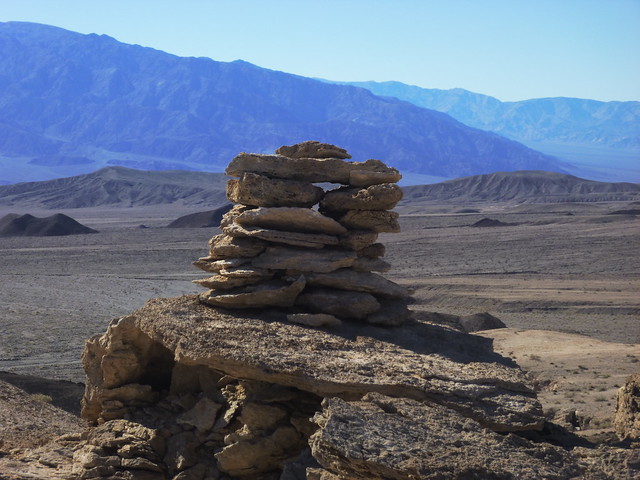 Does it go back to the mining times? Was it put there to show where the natural bridge is?

We went to Sidewinder Canyon the next day, and found the left-hand side canyon (somehow missed it the first time I visited). We followed it all the way up to the top where we found a nice east-west trail. To the west it ended in a couple of parallel lines of stones, but we didn’t follow it to the eastern terminal. 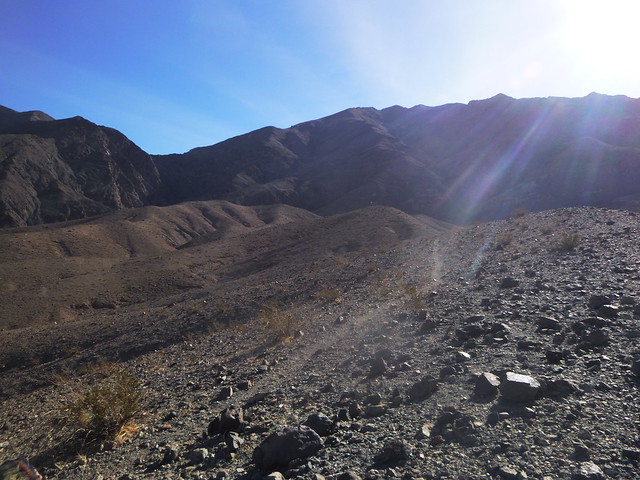 Is it a sheep trail, man-made, or both? Where does it go? Sidewinder was a ton of fun and I was happy to show my son some of the most interesting side canyons. I’m also glad I brought a flashlight this time.

On the drive down to Sidewinder, we passed a gentleman on the west side of Badwater Road sitting at a grand piano. Oh-kay. I was eager to get to the canyon so we drove by without stopping, but on the way back, he was playing music and I got a picture of him 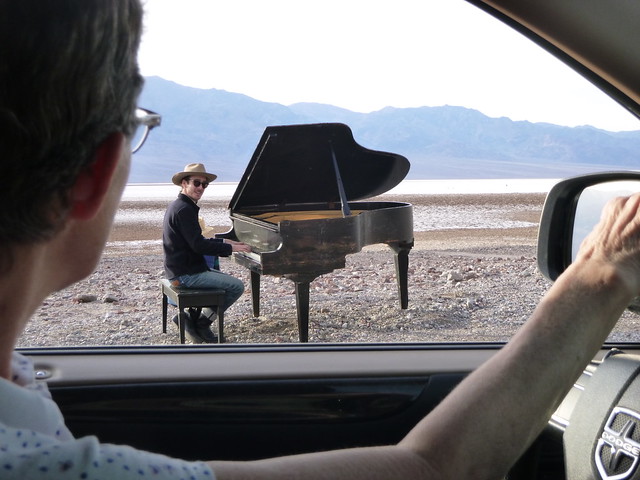 The woman with him explained that he was playing from sunrise to sunset, and that they had brought the piano out in a pickup truck. Good thing he picked a short day in January to play, instead of June, say.

Later, by myself, I hiked up to Foundry Canyon. I knew there was a tall, sloped dryfall early in the canyon, but read in a couple of places that it was doable. Not by me, unfortunately. It was very slick, and I felt like a hamster in a wheel trying to get somewhere. I would manage about a foot or so up and then slide back down. As I walked back out of the canyon mouth, the thought occurred to me that I hadn’t tried it barefoot, so I went back. No better luck. I’m planning to try it again someday but with someone to help me.

Last hike was to the Crack. The walls are not high, but close enough to be fun. This small formation seems to have enormous diversity, not in its walls, but in the rocks all over its wash. 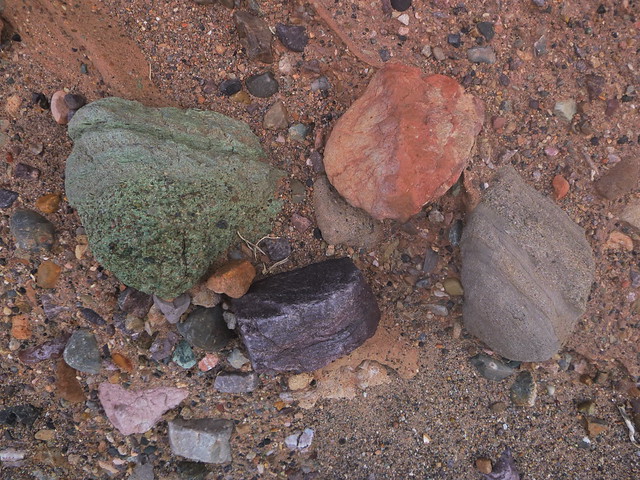 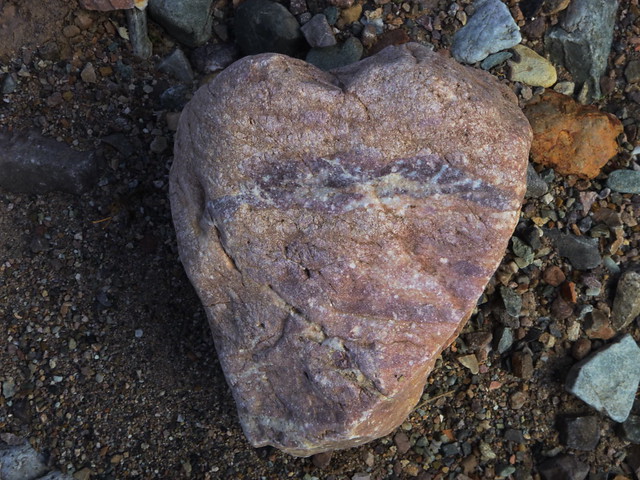 The red sandstone parts far from the entrance are a nice treat too. 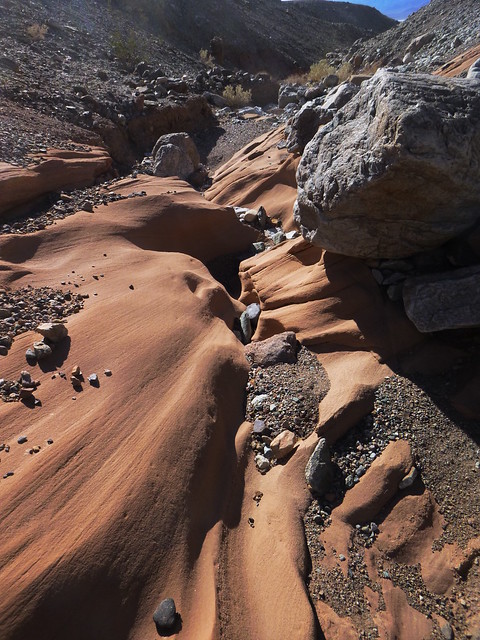 One rock in particular stands out for me; I ran across it on my first exploration last year, and was delighted to find it again. 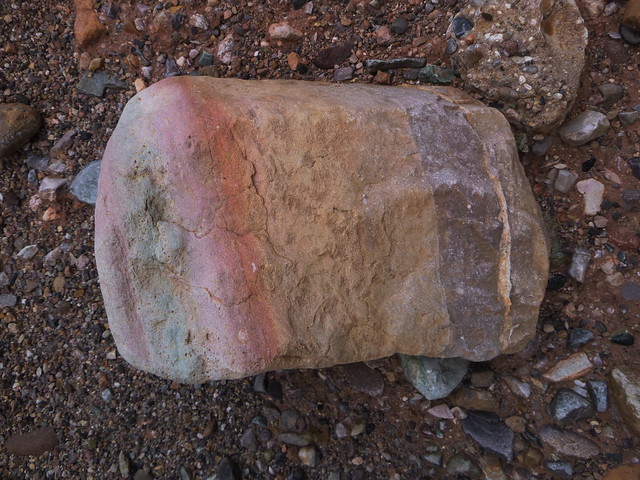 Because this was during the government shutdown, I reserved three days at the Ranch, figuring I could camp after I figured out what was available. When I checked in, the clerk told me they had a deal going on that I could stay another three days for $99 each. I took them up on it, but I’m not sure if they do this regularly or if their traffic was down due to the shutdown.

Two final pictures of scenery from the road: 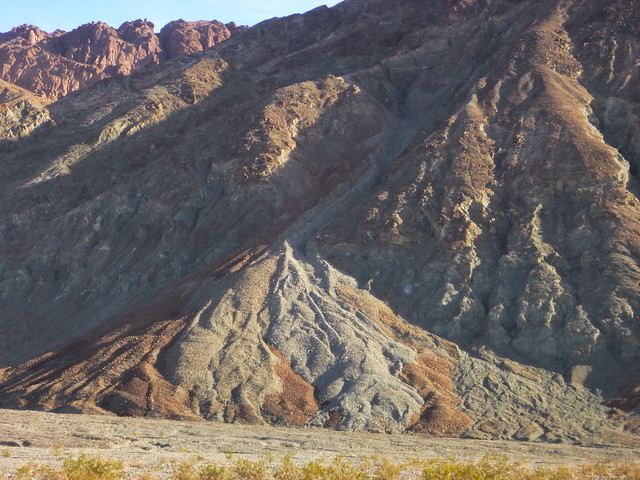 My favorite alluvial fan from Badwater Road, and 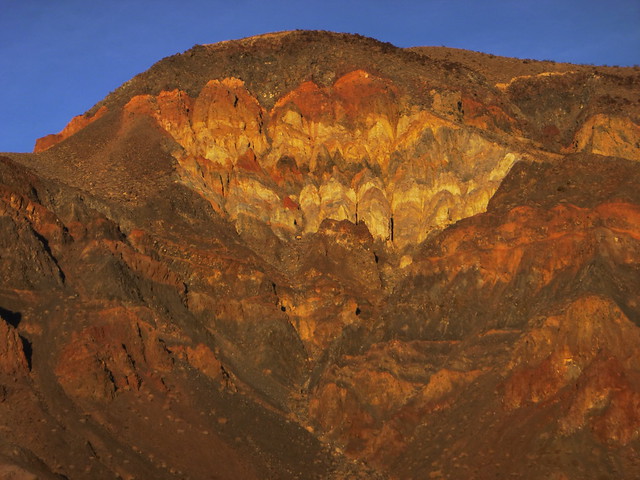 Sunset hitting the cliffs as I drove uphill on the west side of Towne Pass.
Top

Re: Cyty's, Sidewinder and the Crack

Thanks for posting. Nice pix! The guy with the piano.. would have weirded me out

Reminds me that I never posted a TR from my trip this spring. Been busy just now, between mountain trips to Montana and Colorado.
My Death Valley panoramas:
http://www.media.mit.edu/~geek/dv_panos.html
Top

Re: Cyty's, Sidewinder and the Crack

The cairn probably pre-dates mining times based on others I have seen.
Top
Post Reply
3 posts • Page 1 of 1