Hello,
I am new to this forum and I will be visiting Death Valley Nov8-12th. I noticed there is a 49ers encampment event that overlaps part of this time, and I've read it came be very busy during this time. Is this event isolated to certain areas of the park? It seems like it may be more in the furnace creek area if I understand correctly. I am visiting primarily for photographic reason and hiking. The photographic reason is what has me concerns about crowds. Is the park going to be overly crowded or if I hike out on some trails, will I be avoiding most of the crowds from this event? Any insight that can be provided would be greatly appreciated. Although preliminary in my research, I am so far planning to explore the mesquite sand dunes, Badwater basin, Dante's view. I was also looking into Eureka Dunes but not sure how accessible that is by car. I plan to visit other areas as well, but still in the early research phase.

Hi!
So crowded means a few hundred extra people running around in the whole park. So it is not that big of an issue. Yes, the Furnace creek area is where most people are. There will be many many thousands of acres without people. Eureka Dunes is a rough ride. We go out there early November all the time, just as the encampment will be starting. Ask away......
Top

The Eureka Dunes are usually accessible by any vehicle. The road is usually washboarded, so that can be annoying and make you go pretty slow.

There will be people at the Mesquite Flat dunes and Badwater. For Badwater, hike a mile or two out and you will be beyond almost everyone. The dunes cover a very large area, so finding areas without people won't be hard, though people tend to focus on the tallest dune, and there are usually people in the way there. There will also likely be people at Dante's, but they won't be in the way of shots out from there.

You will have endless possibilities.
Top

At Dante's, sometimes people are in the view and it makes it all the more interesting. 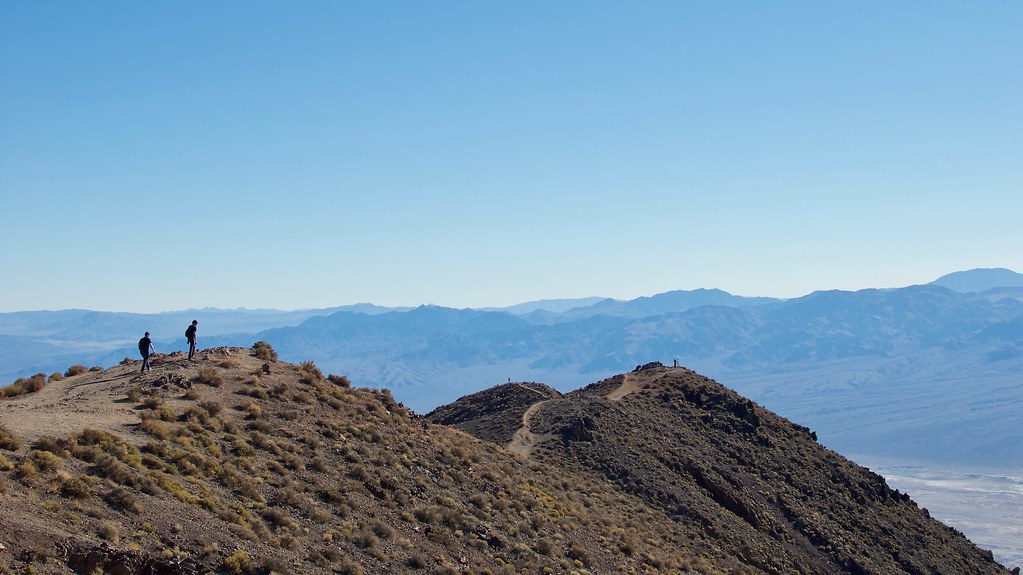 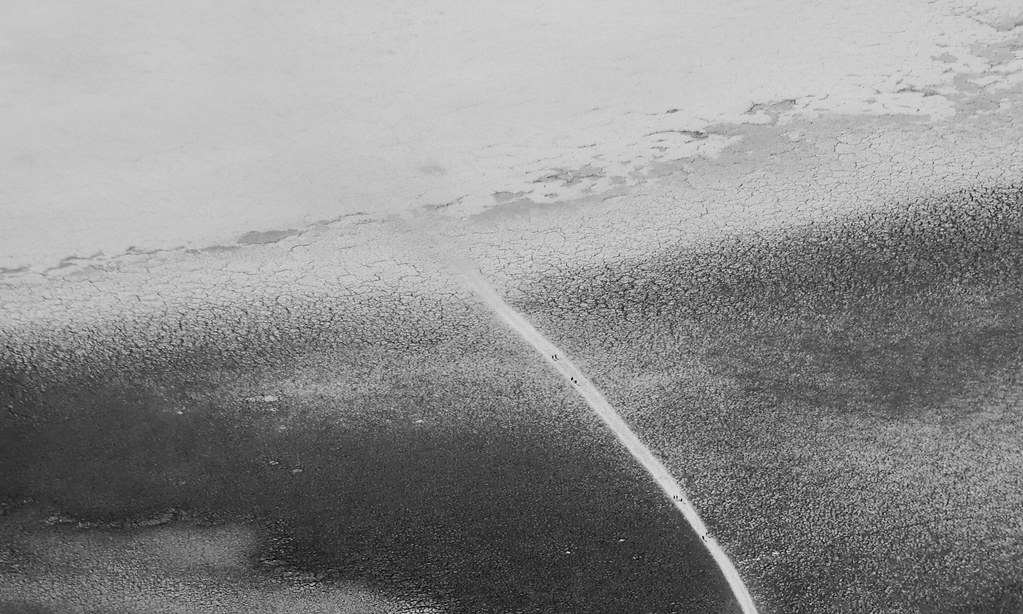 DSC_0195 by Andrew Dunning, on Flickr
Check out my reports and informative ramblings at http://dvexplore.blogspot.com
Top

Thanks for the responses! I've been to other parks during busy times and photographic spots can be hard to even get a place to set-up, so this doesn't sound like it will be a problem here during this time. I may end up passing on Eureka Sand Dunes, as I will have a rental car and not sure if I want to venture all that way. I will be staying in Stovepipe Village, so I will be able to get up early and to the dunes prior to sunrise and hopefully too many people on the dunes. I may do some nighttime photography as well- and probably around the dunes as it's the closest to where I am staying. Any concerns about animals at night- I am thinking along the lines of rattle snakes and such. During the day I am thinking they're easier to spot, but wouldn't want to encounter one when it is dark.
Top

BTW, love the pics Andrew- the second one is my favorite!!
Top

If you're at SPW you're right near the dunes. If there's a high wind per chance overnight, get out early and you'll see the dunes scrubbed of footprints, very nice. Otherwise, if you park near the main, paved parking area, you'll have lots of tracks, but great morning light. But you can also just drive a bit east from SPW, park on the shoulder, and walk into the dunes anywhere. Think about the light - the backdrop of the Cottonwoods in morning light is very nice, and you can get shots of dune with that background anywhere on the west / north edge of the dune field.

Animals? I used to take my young daughter out into the dunes at night (usually January) so we could lie in the sand and look at the stars. One night when she was about 4 she suddenly said "Dad there's a wild animal behind you!". It was the cutest kit fox - a bit bigger than a very large house cat. She went on "Is it going to eat us?" In a nutshell, no

I think you're quite unlikely to see snakes in November. It's pretty cold for them, even down low.

Eureka Dunes are beautiful but yes, it's a long way to haul, especially on a first time trip where there is so much else to catch your fancy.

As others have pointed out, if you go to Badwater go way out, like 1/2 mile - you're much more likely to see the "salt polygons" that are so photographed. And remember that because Telescope Peak is 2 miles above you to the west, the sun sets pretty early, in terms of thinking about light. If there is a moon and you're there in the dark, it can be really amazing!

Dante's in early morning or sunrise is also awesome, though cold! I like Aguireberry Point for sunset myself, if it is a clear day, especially if you can see the mountain shadows creeping across the desert floor.
My Death Valley panoramas:
http://www.media.mit.edu/~geek/dv_panos.html
Top

Another spot for sunset photography

Besides those excellent notes from MojaveGeek you might consider hiking halfway up Golden Canyon, taking a short side route up the north face from which you not only get stunning views of a Panamint Range sunset to the west but the easterly cascading light descending over the Red Catherdral, the Manly Beacon, and the Borax Benchmark.

Here's an example for you:
Life begins in Death Valley
Top

Some of the spots are even better to photograph with people in them to get a little perspective. You shouldn't have much problem with crowds though.....it's a big place.
Top

DavidW wrote: ↑
Mon Oct 21, 2019 9:52 am
Some of the spots are even better to photograph with people in them to get a little perspective.

Agreed and this is precisely why I love the zooming in on the elderly man hiking down the southwest face of the Manly Beacon in the video - perspective on several levels. Photographing visitor's reactions to the wonders of DV is as much fun as oogling at the wonders myself.
Life begins in Death Valley
Top

Hi- curious about the Mesquite sand dunes- do the foot tracks usually clear out overnight with winds- or do you need a good wind storm for tracks to be removed? Going pretty soon and hardly had any time to plan - and just curious from what I am reading about the dunes. One site indicated nighttime winds clear tracks away and others indicate you need a good wind blowing through.

Totally depends on the weather. I've been out there on the dunes in gale-force winds where my own footprints disappeared rapidly and out again where the dunes are covered with prints because the wind has not blown for several days. So good luck! Let us know how your trip turned out.
Life begins in Death Valley
Top

I/we just returned Monday from a week long trip that was the coldest and windiest I've seen last week of October last three years! 49er's have it good this week!

Yes the early morning after the winds, at sunrise(I know, starts real early now) is the best. You might see sidewinder tracts...following those kangaroo rat tracks! I saw them last week last October. Hot.

Most fun is just hustling out to the tallest dune before anyone else gets there...takes about twenty minutes.


At Badwater I park just past the parking lot at the point and walk out pretty far. The formations start real high/brown and have to be stepped over so as to not knock them over. Really neat this time of year. In spring often washed out with rain.

"As others have pointed out, if you go to Badwater go way out, like 1/2 mile - you're much more likely to see the "salt polygons" that are so photographed."


Sunrise last Friday Zabriskie many annoying "pro" photographers. Many below the viewing area. One guy up at viewing area with tripod kept asking people below if they could move as they were in his way of his shot. Good grief! Also he decided it was too quiet and so put on soft flute music. Like we need that in DV!
Top

PhotoHiker5 wrote: ↑
Thu Nov 07, 2019 9:27 am
Hi- curious about the Mesquite sand dunes- do the foot tracks usually clear out overnight with winds

In general, no. You need a pretty good blow to replace the tracks with the beautiful sand ripples.

But if you avoid the highest dune and don't park at the lot where everyone else parks, it is relatively easy to find clean sand with nice backgrounds.
My Death Valley panoramas:
http://www.media.mit.edu/~geek/dv_panos.html
Top
Post Reply
14 posts • Page 1 of 1